A man spent millions on an enormous plot of land near Reno. Now he wants to build a community based on the blockchain technology introduced by Bitcoin.

STOREY COUNTY, Nev. — An enormous plot of land in the Nevada desert — bigger than nearby Reno — has been the subject of local intrigue since a company with no history, Blockchains L.L.C., bought it for $170 million in cash this year.

The man who owns the company, a lawyer and cryptocurrency millionaire named Jeffrey Berns, put on a helmet and climbed into a Polaris off-road vehicle last week to give a tour of the sprawling property and dispel a bit of the mystery.

He imagines a sort of experimental community spread over about a hundred square miles, where houses, schools, commercial districts and production studios will be built. The centerpiece of this giant project will be the blockchain, a new kind of database that was introduced by Bitcoin.

After his driver stopped the Polaris on a high desert plateau, surrounded by blooming rabbit brush and a grazing herd of wild horses, Mr. Berns, who is 56, pointed to the highlights of his dream community.

“You see that first range of mountains,” he said, pointing south. “Those mountains are the border of our South Valley. That’s where we’re going to build the high-tech park,” a research campus that would cover hundreds of acres. There are also plans for a college and an e-gaming arena.

It takes imagination to see what Mr. Berns sees: a futuristic community growing out of the desert near Reno.CreditJason Henry for The New York Times 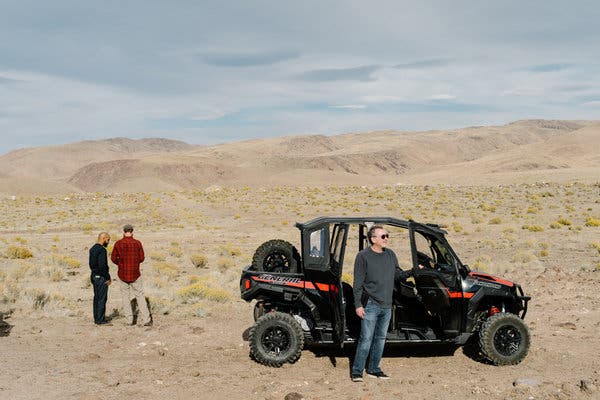 As strange — even fantastical — as all this might sound, Mr. Berns’s ambitions fit right into the idiosyncratic world of cryptocurrencies and blockchains.

The blockchain began as a digital ledger on which all Bitcoin transactions are recorded. Some aficionados have grander plans. They think it could be a new way of taking power back from the institutions they believe are calling all the shots.

Just as Bitcoin made it possible to transfer money without using a bank, blockchain believers like Mr. Berns think the technology will make it possible for ordinary people to control their own data — the lifeblood of the digital economy — without relying on big companies or governments.

There is a fuzzy line between these utopian visions and get-rich-quick schemes. Several cryptocurrency projects have been shut down by regulators; apparent hucksters have been arrested; and a plan to transform Puerto Rico with cryptocurrencies has been criticized as nothing more than a bid to take advantage of the island’s status as a tax haven.

Mr. Berns was drawn to Nevada by its tax benefits, including the lack of income taxes. And the breadth of his ambitions certainly raises the risk of a boondoggle.

So far, there isn’t much to see of the community envisioned here, other than an office building and digs by surveyors.CreditJason Henry for The New York Times 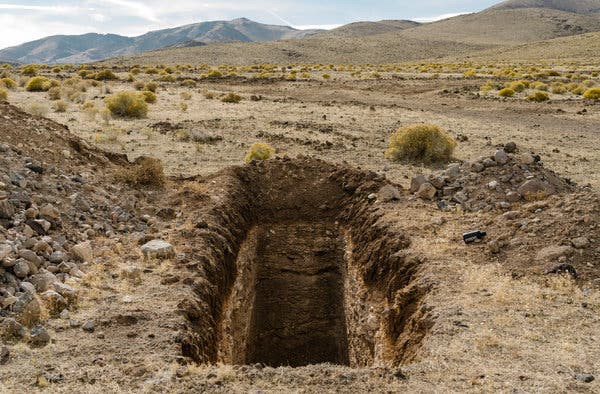 But he is different from his crypto-brethren in one big way: He is spending his own money. So far, he said, he has spent $300 million on the land, offices, planning and a staff of 70 people. And buying 67,000 largely undeveloped acres is a bit of old-fashioned, real estate risk-taking.

Still, Mr. Berns said his ambition was not to be a real estate magnate or even to get rich — or richer. He is promising to give away all decision-making power for the project and 90 percent of any dividends it generates to a corporate structure that will be held by residents, employees and future investors. That structure, which he calls a “distributed collaborative entity,” is supposed to operate on a blockchain where everyone’s ownership rights and voting powers will be recorded in a digital wallet.

Mr. Berns acknowledged that all this is way beyond what blockchains have actually accomplished. But that hasn’t discouraged him.

“I don’t know why,” he said over the roar of the Polaris engine. “I just — something inside me tells me this is the answer, that if we can get enough people to trust the blockchain, we can begin to change all the systems we operate by.”

Mr. Berns has managed to win over local officials who are eager for economic development. Nevada’s governor, Brian Sandoval, read a proclamation that named the Blockchains property “Innovation Park” at an event last month where Mr. Berns sat on a panel with the governor and Elon Musk, the chief executive of Tesla.

The Truckee River runs through Painted Rock in Storey County, Nev. Blockchains has preliminary county support for a new town along the river, with thousands of homes.CreditJason Henry for The New York Times 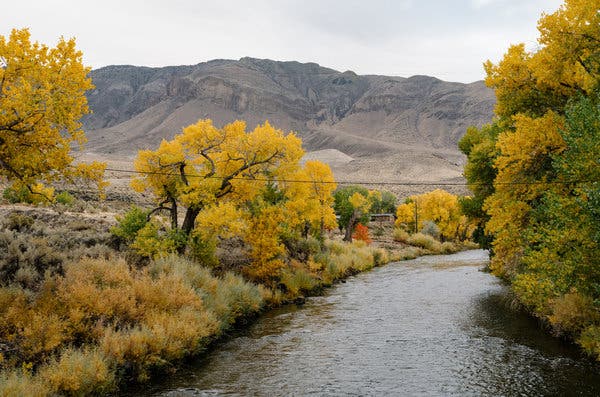 Tesla’s Gigafactory in Nevada, which has been described as the largest building in the world, is surrounded by Blockchains’ land. Companies like Google, Apple and Switch also have properties in the industrial park that is surrounded by Mr. Berns’s holdings.

This week, he announced a memorandum of understanding with one of the state’s main power companies, NV Energy, to team up on projects that will run energy transactions through a blockchain.

The Nevada county where this is all located, Storey County, has only about 4,000 residents and was best known, until recently, for its history of silver mining and its modern brothels, including one owned by a county commissioner.

That same county commissioner, Lance Gilman, bought the land surrounding the brothel and turned it into the industrial park where Tesla and Google are now located.

Blockchains has already received preliminary county support for a new town along the Truckee River, with thousands of homes, a school and a drone delivery system, and is working closely with the county on a broader master plan.

Employees inside the Blockchains office. Mr. Berns has hired a staff of 70 people to work on his dream community.CreditJason Henry for The New York Times 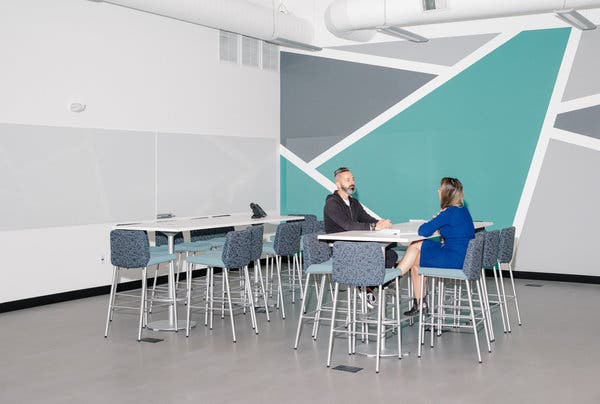 But for now, Blockchains is empty land and a repurposed office building. Mr. Berns said the company won’t begin construction on the broader property until late 2019, at the earliest, after putting together the master plan and getting it approved by the county.

The office manager from Mr. Berns’s old law office in Los Angeles, Joanna Rodriguez, moved with her four children and husband to Nevada.

“He has these crazy ideas — but I know that every time he sets his mind to something he will get there,” said Ms. Rodriguez, 29, who has worked with Mr. Berns for eight years and is now the manager of the Blockchains office in Nevada. “That’s why I decided to move.”

Mr. Berns spent most of his professional life on class-action lawsuits, many of them against financial companies. He learned about Bitcoin in 2012 but was won over by another cryptocurrency, Ethereum, which makes it possible to store more than just transaction data on a blockchain.

Mr. Berns bought Ether, the digital token associated with Ethereum, in a big sale in 2015. Thanks to an astronomical increase in the price of Ether and some well-timed selling last year before it crashed, he became wealthy enough to fund his dream project.

A rendering of what this blockchain-based community might become.CreditDesign by Ehrlich Yanai Rhee Chaney Architects and Tom Wiscombe Architecture 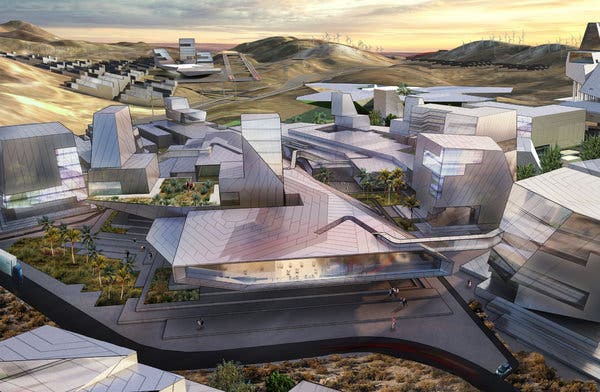 Ethereum is what he believes makes his community more than just a giant real estate project. To understand why requires more than a bit of imagination. And faith. Every resident and employee will have what amounts to an Ethereum address, which they will use to vote on local measures and store their personal data.

Mr. Berns believes Ethereum will give people a way to control their identity and online data without any governments or companies involved.

That is a widely shared view in the blockchain community, but there are significant questions about whether any of it can work in the real world. Most blockchain companies have failed to gain any traction, and Ethereum and Bitcoin networks have struggled to handle even moderate amounts of traffic.

Mr. Berns believes that one of the big problems has been security. People have been terrible at holding the private keys that are necessary to get access to a Bitcoin or Ethereum wallet.

He wants to address that with a custom-built system where people’s private keys are stored on multiple digital devices, kept in vaults, so that no one device can gain access to the keys. He has already purchased vaults that are burrowed into mountains in Sweden and Switzerland, and he plans to build additional vaults in the mountains in Nevada.

The other thing holding back Ethereum, Mr. Berns believes, has been a lack of real-world laboratories. His Nevada land, he hopes, will change that.

“This will either be the biggest thing ever, or the most spectacular crash and burn in the history of mankind,” Mr. Berns said. “I don’t know which one. I believe it’s the former, but either way it’s going to be one hell of a ride.”